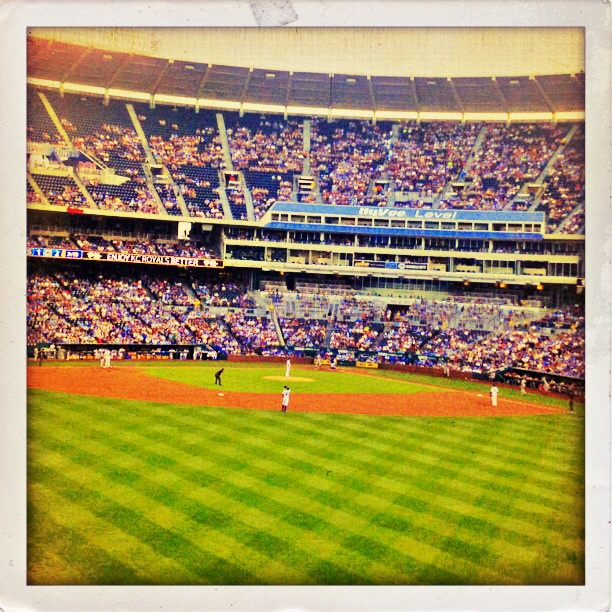 America is bleeding blue. Tonight is the 7th game of the World Series and almost every American that doesn’t live in San Fran is rooting for the Kansas City Royals…the Cinderella team of the baseball season. Aside from being from KC myself, I love the Royals because they exemplify the power of a team.

First, the sum of the players equals more than it’s individual parts. KC doesn’t have a baseball rock star like Mike Trout or Miguel Cabrera. We have good, scrappy players…but we don’t have the secret weapon that you so often find on sports teams. In fact, one of the stars of the playoff journey is Mike Moustakas who was sent down to the minor leagues just a few short months ago…but wow…look at him now. The team makes improbable catches and refuses to cave when the odds are ever not so in their favor.

Secondly, they have purpose. This is the first time in 29 years the KC Royals have made it to the playoffs. And boy don’t they act like it! History was made during the post season when the Royals swept their way to the World Series. They are the first team in the history of baseball to make this happen. I am pretty sure you can’t find a broom in the KC area as all the fans bought them up to use as props during the home games.

Finally, they don’t give up…even when everyone else does. I remember watching the Wild Card game at a bar. When the score became 3-7 my husband and I went home. Then, as the Royals fought their way back in the 8th inning with a score of 6-7 we had hope. However, once the A’s scored in the top of 12th, tv’s turned off, people started playing games on Facebook and it seemed like the season was over…except it wasn’t.

The Royals came back to win the game and rally a city behind two simple words; we believe.

Every day teams have the same power as the Kansas City Royals. When you add up the sum of all your players, both high performing and not so high performing, magic can happen. If you give the team purpose they too will make improbable catches and hit the big hits when necessary. Finally, if you empower your team you can ensure they won’t give up…even when everyone else has. Sometimes it might even be you that has given up.

Imagine the endless possibilities of what your team can do if you simply decide to believe in the power of one…but more importantly in the strength of many.